You need a PDF viewer similar to Adobe® Reader® to view and print this document.

Due to the support of the Missouri AAUP, and the generosity of the AAUP Assembly of State Conferences, I was able to attend the Summer Institute in Portland, OR. The experience was invaluable. I attended a series of workshops on chapter leadership.

The Summer Institute is part of the national AAUP's effort to reformulate its vision. Beginning about 5 years ago, national leaders recognized that organizing was down and chapters were inactive or passive. They feared the national body had become a place chapters sent their dues to, and not much else. The new vision sought to strengthen and energize chapters, to use them as the vanguard to push back against attacks on higher education and the trend towards corporatization. A core belief became the idea that the faculty themselves can do this on the ground, through leadership training and by building campus organizations into a movement for academic principles and economic security. As always, the national AAUP is there to provide training and information, and always ready to show up at your campus to help.

To make this vision a reality, Chapter Leadership sessions held a prominent place at the Summer Institute. In the "Making Connections" workshop, national leaders Rudy Fichtenbaum, Howard Bunsis, Christopher Simeone, and Irene Mulvey worked with attendees to address the challenge of maintaining interest and momentum in local chapters when there's not a crisis. It's easier for faculty to put up a united front when their colleagues are being fired without just cause and when administration is not respecting shared governance. This is negative motivation.

What we seek in chapter growth is positive motivation, that energy and excitement that is maintained when the university is not in immediate peril. I noted three central elements. 1) Show the good work of the AAUP! Get the message out regarding AAUP advocacy, victories, and organizational benefits. There were so many inspiring stories at the Summer Institute of faculty at small colleges and large universities standing up for academic principles and shared governance, and in the end winning. You can also find many of these stories in AAUP publications such as Academe and others.

2) Promote to faculty the AAUP core principles. Appeal to the ideals of academic freedom, tenure, and shared governance. Every faculty member, whether tenure-track or contingent, should have academic freedom for their work. Individuals don't have academic freedom, but their work does. The research must be free to go where it's going to go. Academic freedom is not secure without tenure. Tenure is not a reward for publishing or bringing in grants. It is a guarantee of due process in the case of dismissal: you shouldn't be fired because someone doesn't like you or because of something you wrote/said, only for a just cause. Shared governance means that faculty is involved in decision-making. Yes, boards and presidents make decisions, but faculty should be consulted. There aren't different "models" of shared governance—there is the model, the AAUP model.

3) The final element of positive motivation is simply listening to faculty. What are their concerns, what issues do they care about? These don't have to be things faculty think are wrong with their university. In fact, chapter leaders should listen to what faculty says about ways to make their lives and their work better and easier.

These types of positive motivation make chapters more effective when the time comes to confront a real crisis. At Fairfield University in Connecticut, for instance, administration took the healthcare surplus and put it in the operation budget, while simultaneously threatening to reduce healthcare. The Fairfield AAUP chapter, already strong, took action, publicizing the administration's move, demonstrating that faculty was willing and able to take a stand. When this crisis passed, the Fairfield chapter maintains its energy and motivation through, among other things, an AAUP-sponsored fall picnic for new faculty, which doubles as a membership drive. It shows the Fairfield AAUP is having fun while being an effective advocate. Now that's positive motivation.

In another session, veteran AAUP Pacific Northwest Lead Organizer Jim Bakken shared his knowledge of organizing. He noted there was both and art and a science to it. The "art" aspect often revolves around the strengths of the leader and his/her ability to listen, motivate, plan, and otherwise serve as a strong lynchpin for the local chapter. The "science" element, Bakken explained, is approaching any issue campaign in three phases: preparation, process, and, of course, victory. Bakken took the us through the sub-elements of each phase, showing the attendees how a typical issue campaign usually played out. As a new faculty member and a new chapter leader, this session helped me visualize the behind-the-scenes activity of mobilization and organization, and gave me a myriad of ideas of what it means to be an effective chapter head.

Two sessions on Saturday morning provided the nuts-and-bolts of managing a chapter, including legal aspects. This information was very helpful, but it doesn't make the most exciting newsletter discussion! Here are some key terms from those sessions, so you can use your imagination: faculty directories, membership forms, metadata, contact sheets, spreadsheets, relational databases, atomic data, unincorporated association, Form 990-N, and 501(c)(6). Seriously, AAUP Organizer Joshua Guy Lenes and AAUP Senior Counsel Aaron Nisenson are very good at what they do, and took us through the day-to-day, sometimes mundane but always important practical elements of running a large organization, and the ways in which that organization should serve a chapter's goals, targets, and timelines.

Finally, I found a common theme at the informal group discussions in the "Building Power at Community Colleges" and the "Tools for Digital Organizing" sessions: Getting Students Involved and Connected to Faculty and their AAUP Work. Discussing AAUP campaigns with fellow two-year college instructors laid bare the need to engage students in our work. At her community college in Ohio, Paula Smith passionately showed us how students had the back of faculty during a difficult confrontation with the president and other administrators, and how the AAUP worked with students promote important issues.

A key way to bring students on board, and to show them what life as a professor is like and how shared governance and academic freedom are crucial, is through social media. Samuel Dunietz and Joshua Guy Lenes introduced us to the many ways in which, through online mediums, organizing can be enhanced and issue campaigns can gain steam. This session was a crash course in using Facebook and Twitter effectively, as well as utilizing other social media platforms that our generation might not be familiar with: Instagram, Periscope, Facebook Live, ActionSprout, and the most popular app among college students, SnapChat.

Every AAUP chapter, they explained, should have a "Rapid Response Team," a type of social media committee designed to expand their audience, engage with supporters, take photos/videos from events, submit editorials, announce events or important issues, increase pressure on targets, and the like.

In fact, during this session we posted our group's photo on SnapChat—that's me in the back! 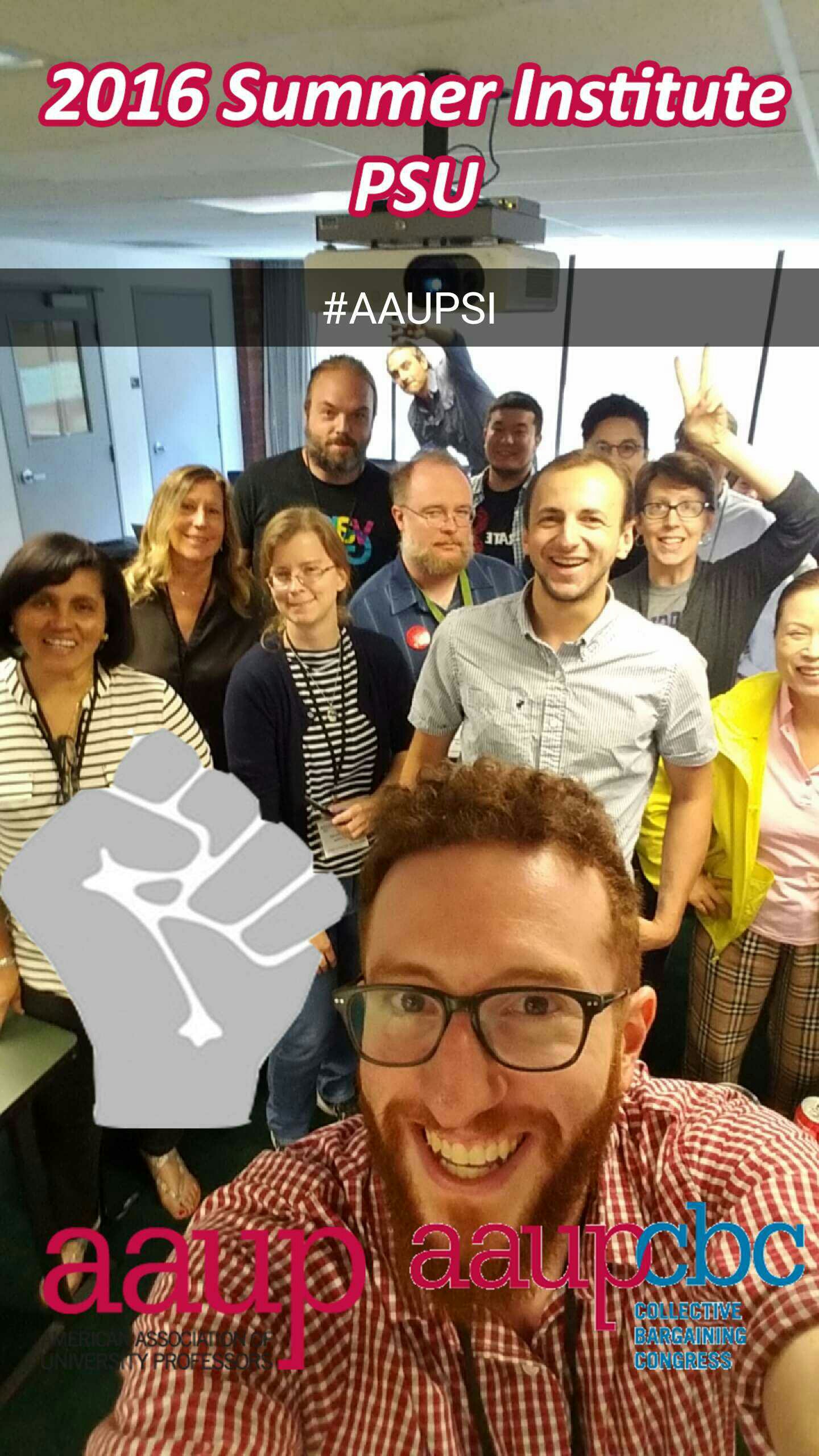